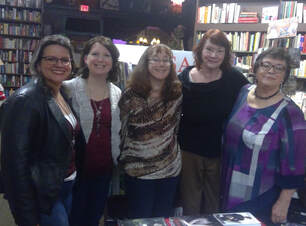 YOUR FUTURE IN INK
What:
Free workshop/discussions about changes in the digital publishing industry and marketing strategies with four local authors covering ten different genres.

To submit questions/points of interest: mlrover@juno.com (Please enter "Workshop" in the subject line. 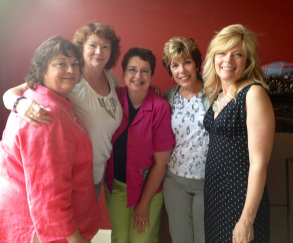 WRITERS KNOW HOW TO PARTY

From write, I mean, right, to left is Shirley Jump, Janet Dean, Kayleen Reusser, Judith Post, and moi. Scribblers need support and we get the best from our writer friends. I've known these gals for longer than any of us will admit. Please look them up online. You won't be disappointed.

Along with articles and other stuff, I'll be plugging in photos from events, get-togethers, photo ops and parties, like this one, saying good-bye to Shirley (moving south to the sun). Couldn't blame her, but miss her just the same.

This first article is one I wrote for Summit City Scribes, a group of dedicated writers of all genres and close friends. I've used this piece a few other places too. The topic gives insight to what it takes to make characters real and interesting.

If asked, would you know what flavor ice cream your protagonist prefers? Do you care? Is this important? Only if it’s important to you as the storyteller or it influences the plot. Sometimes, something as simple as food preference will resonate with a reader.

The storyteller must know the heart and soul of their characters. The late Suzanne Sizemore defined the process as knowing what the character wants, why they want it and what they will do to achieve that goal. An entire plot will hinge on those three questions, if you are writing a character-driven story. If it’s plot-driven, then those questions answer how your character will respond to plot events and incidents.

My background is in theater. Characters come to me whole. It’s the only way I can describe it. When I see the character in my mind, I know preferences for everything from cars to clothes, food, to the type of pet they’d have. I know how they will respond to any situation, and most importantly, their weaknesses, fears, and deepest yearnings, for this is the stuff that makes a character real and helps the reader to identify with what is on the page.

Let’s be real. Perfect people are boring. One-dimensional people are nice, make terrific, easygoing friends, but they’re not as interesting in a story as a morality-challenged nun. Which person would you rather read about?

Here’s an example of creating believable traits. Ask yourself how well you know your character. Dig deep. Would he or she lie? Perhaps a compulsive liar? How’d they get that way? And what if a protagonist, who staunchly believes he’d never tell a lie, is forced to fib? How do we show the physical responses, other than shifty eyes, on the page?

Two, former CIA guys wrote a book, which delves into the nitty-grits about lies and types of lies. They say there are “smart lies” we all tell. Being guys, and during a NPR interview, one described a smart lie is what a husband says when his wife asks him if he likes her new outfit or haircut. They agreed that they’d compliment the wife, whether they liked it or not. But I think, if they were really smart, they would have physically demonstrated their reply with a hug, kiss or something interesting whispered in the ear. Then, through action, it becomes believable. In writing, and often in real life, showing works better than telling.

Have I digressed? What was the purpose of the previous example? How “smart” is your character? Does he care enough to make the effort to ensure his wife believes? Does he believe it himself? These are questions the writer must ask in order to create a layered personality. If it were a romance, a little scene like that could be a perfect setup for a seduction. Or—what if the man was more than just smart and playing along the wife he plans to kill?

There are many ways to create character. Family and environment, hardship or plenty in childhood are key. Notice how your friends or family members act during different situations and imagine how your character would react based on the family history you’ve developed. Families also tend to have the same gestures and expressions, verbal and physical.

Remember that most of what moves a story forward is how the character reacts, often to the messes they’ve made on the way to getting to their goal. The bigger the mess, the more tension.

We as readers want to know there are others out there with warts and problems similar to our own, to see them kick the crap out of an enemy, overcome evil, or wrestled down hideous problems and come out standing strong, maybe bruised, but always wiser.

It is essential that by the end of the story your character has changed or learned something important about themselves. This can come through events in the plot or an epiphany that might seem trivial to someone else. Most often, these changes come through BBM (big, black moment) or an event that forces the character to confront what needs to be changed or rectified. The ubiquitous adage of that which does not kill us makes us stronger often applies in most stories we read. In the end, the character has learned, is stronger, has survived. Maybe even found happiness. I don’t know about you, but that’s what I call a satisfying conclusion.

Why Are Those Dummies Stumbling Around in the Dark?

Many people over fifty look at their smart phones and wonder what to do with it besides make calls. I hand mine to my
grandson and ask him to employ whatever voodoo is necessary to fix the problem.  I’ve succumbed to the fact that there
is a new gene that comes with being born in the last twenty years. It’s called the knowwhattodo-technowisegee-nome.
Whatever it is, it’s nowhere to be found in my DNA strands.

On the other hand, this same age group came to me one day to ask what happened to the TV remote because they
needed to change the channel right now. I remember staring at their stumped expressions, walking over to the TV set,
and pressing a button on the side. They looked at their grandmother with awe. A miracle, and I stood amazed at how
quickly time erases the simplest aspects of  life.

One of the most difficult tasks of penning historical works is keeping one’s head in the time period. Impetuous lovers
rush up unlit staircases, down halls then into black rooms with no thought of lighting. There were no light switches on
walls prior to the late eighteen-nineties, and yet the hasty pair can see each other perfectly as they whip out of their clothes.
To be fair to all genres, I’ve encountered this (what I call the Dark Room Stupidity Affect) in fantasy works, where the world
building has laid out a primitive culture and yet there is perpetual lighting.

Perhaps I should have titled this post Bring on the Flaming Torches.

Some writers are so deep into visualizing the action in their minds that they set their scenes as if on a stage, where
someone in the light booth has set the computer with cues. Instant let there be light.

We all have our little peeves that make us shake our heads in disgust. The last time I threw a book across the room
was when I read about a ball in the nineteenth century where a man cut-in on a dancing couple. First, I doubt kids
today even know what it means to cut-in, but more importantly, the practice of  interrupting a couple during a dance
did not come about until the beginning of the twentieth century. Women carried dance cards, often with tasseled, little,
pencils attached. They looked like tiny booklets. Inside there were lines where a gentleman could write his name for a
specific dance from a waltz to a schottische. Some women preferred to write the names down, and of course, the
gentleman should have been previously introduced before signing up for the cotillion. The cards were saved as mementos,
to sigh over the next day, following weeks and years.

Years ago, there were specific, well-accepted rules of courteous behavior when it came  to social engagements, just as
there are today. It’s rude to talk on your cell or scan messages when with others. At the very least, ask to be pardoned.
Manners are slowly disappearing in current culture but were an ingrained fabric of life a century ago.

Don’t get me started on horses. I’m boggled at how teams, mounts, and rigs can appear and disappear, like vapor. For
a drive in town, whether one had servants or not, horses hooves had to be cleaned before driving or riding, tack had to be
selected, carried, harnessed or tacked. A horse should not be taken directly from standing in a stall without some sort of
warming up, the horsie stretch-out. Sometimes carriages had to be rolled out of the carriage houses and barns to an open
area for harnessing. Seasons and weather demanded changes. After the equipage came back, tack/harness had to be carefully cleaned and stored, equipages checked for damage and cleaned, the horses had to be walked if overheated, wiped down,
cooled, then fed and watered. The easy way to get around in a western town was to use hired equipages. Most towns had
a livery of some sort or someone who would provide the services, and yet, I’ve read of women, who wore corsets, hats, parasols, gloves that they wouldn’t want smudged, layers of  clothes, hopping into a rig for a quick drive to somewhere. There were
no quick trips, unless on horseback, on flat land, and at a full-out, hard gallop.

On the other hand, when it comes to authenticity, there are exceptions. When reading medieval, I don’t want to know exactly
what it was like in the castle, where the air was thick of the stench of the midden or overfull jakes. In the dark ages,  you
could watch fleas jumping from one person to the next, share a haunch of food with the guy sitting next to you, who probably couldn’t remember the last time he’d washed his hands.

(For history lovers and readers of historical fiction, the blog topics following this post were about corsets/period clothes, and Galena, IL ghost stories)  http://historyfanforever.wordpress.com/